Paolo Dirani is a pianist who has gone beyond the customary role of mere player in his quest for various and brand new artistic arrangements, which he employs to get in intimate touch with his audience 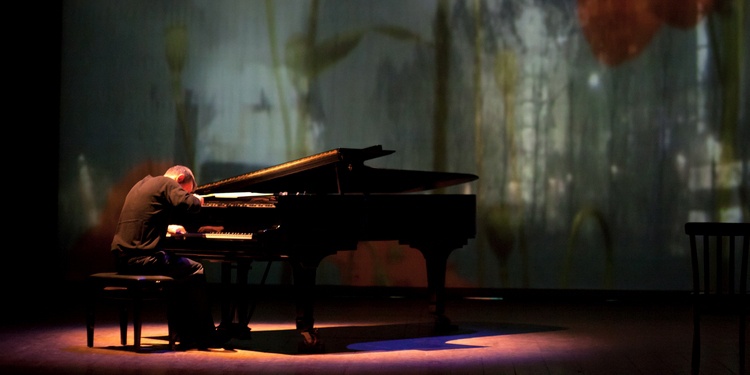 Within our innermost souls there exist deep, unfathomable, feeble enclosures we hardly ever have the venture to explore. Therefore, something almost magic takes place whenever we do reach these depths and react upon their influences; an unrestrainable stream of blissful feelings comes swiftly up for air. I am used to calling such experiences “soul cracks”, since they rise unexpected from nowhere and sadly last just the blink of an eye. les fêlures de l’âme clings on the childlike unbiassed misconception of being able to reproduce and re-experience certain feelings at one’s own will. It is as though we were looking up an old photograph album and were miracolously hit by the identical frame of emotions we were going through while the snapshots were taken. With these words Paolo Dirani leads us into the heart of his new show of which he is also director, sound and vision curator and playwright. It consists of thirty short pieces for piano entwined with as many animated pictures cast on a large screen. Sound and vision melt together and excite vigorously each other in order to reach the most intimate fusion. The show is a peculiar ensemble of vision and sound dotted here and there with curious short tales, anecdotes or just plain thoughts.

Videoclips were filmed non-professionally and then digitally remastered: they are meant to be piercing, innerewise looks in whose midst everything seems to turn and spin and yet remains unsuspectingly still as a cloud  passing by or the foliage of a tree caressed by a light breeze. A throbbing impulse that moves along as music proceeds.

The piano section is divided into five movements and draws its inspiration from the classical repertoire with one exception, namely one of  Genesis’ cult songs. Short compositions, or just parts of them, get unusually entangled with one another and are maintained together by the playful attempt to mix up tone and harmony. Thus, one of Bach’s Preludes ends on the notes of Gershwin’s Concerto in F which in its turn introduces Chopin’s fourth Ballad. Likewise, the Adagio of Beethoven’s Emperor disappears into the Adagio of Brahms’ Concerto in D Minor. les fêlures de l’âmeis divised for piano solo; its melodies are fully included in the cd bearing the same title. It was recorded in Lugo at the Rossini Theatre and later published by Mobydick in 2010.

These arrangements of thirty short pieces, or just fragments of them at times, entwine in peculiar ways and move on through an imaginative tangle of tone and harmony. They are grouped in five little suites called Sequences.

From Bach to Gershwin, the works of some other major composers of the classical repertoire are visited. There is however one exception: a well-known Genesis‘ cult song of 1973.

The introduction to the Adagio Assai of Maurice Ravel’s Concerto in G and an entirely personal digression by Paolo Dirani himself on Lucio Battisti’s hit song Emozioni (Emotions) frame neatly the five Sequences. They are also an integral part of the cd les fêlures de l'âme published by Mobydick.

The musical tracks are closely linked with thirty videoclips, which should rather be called living pictures. These videos are non-professionally filmed, digitally remastered and cast on a large screen.

From a firmly still standpoint, piercing looks of unique intensity splash about and roam at random as if they were clouds going by or flowers caressed by a soft breeze. Anything can happen so that even a tiny goldfish may be seen swimming above an underwater mosaic.

They are mainly short, amusing tales shot forth among the musical sequences. One way or another, they treat the same subjects and refer to the same meanings of the pieces performed. In one of such tales, Gould, a handsome German shepherd, sings along the notes of Bach’s ‘cello first suite; others portray very funny incidents that took place during the video shooting, or especially exilarating anecdotes like that of the page turner falling sound asleep on stage and that of the member of the audience inviting the great pianist Krystian Zimerman to shut up.

The stories are mere glimpses of ordinary day-to-day life, cosy windows entered by light and fragrant words helped on their way down to the innermost depths of vivid imaginationby the delightful bond between sound and vision.

“An intimate musical experience, inviting the listener to an auditory exploration of the poetic landscapes of the soul.”

“Dirani has found a way of reaching out from the stage, giving the audience the impression of a real life encounter as if it were a happy reunion with a charming friend.”

“An admirable interweaving of perfect sounds; stunning music, agile fingers and a spirit of generosity which radiates around 360 degrees produce a fascinating show.”
La Voce
Read the original
“His images and tales play with the senses of his listeners, who are swayed by words and sounds as if by a soft summer breeze. An unusual musical set consisting of fragments of universal music. A unique show.”
La Tribune
Read the original
“He enchants the audience in a magical audio-visual fusion conjuring up a world were time seems to stop for an instant, flowers are caressed by the wind, waters flow and richly coloured images blend majestically with sweet evocative sounds.”
Algèrie Presse
Read the original
"The artist takes on the role of eloquent narrator to express, with elegance and sophistication, the feelings which have invaded his soul. It is a disciplined and luminous interpretation by a great pianist."
Corriere di Tunisi
Read the original
info@paolodirani.it | +39 348 7001127 | © 2023 paolodirani.it - All RightReserved.